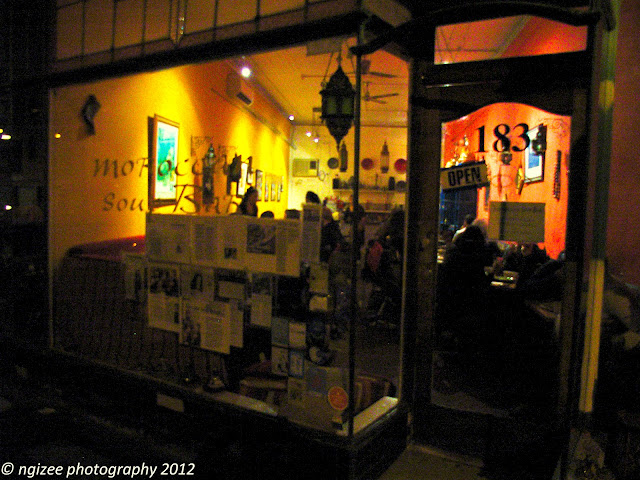 On a rather deserted strip of St Georges Rd in North Fitzroy, lies a real treasure of a vegetarian restaurant.  I probably would have never even considered this place (partly because I am too much of a carnivore), had my colleagues at work not told me about it.  I did some quick review reading on Urbanspoon and was convinced that I had to try it out for myself.  Moroccan Soup Bar get's frantically busy every night and a lot of reviews tell of diners queuing for hours because there is no booking facility for anything under a party of 6, apparently.  There were also tales of being disappointed with the meals and above all - the service.  I had to put these negative opinions aside, and instead, rest my expectations on the good wrap that my colleagues had give the restaurant - and I am glad I did thanks A and J. 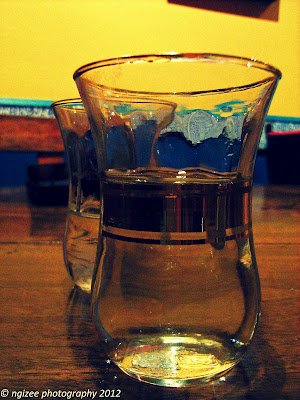 Opening time for dinner is 6:00 PM and it pays to get there early.  We got there at 6:15 and there were no tables for two available.  We were seated at a table for six, which had a booking in an hour, so we had to be finished in an hour - no probs!  The owner greeted us with a hot cup of sweet Mint Tea and proceeded to tell us about the menu.  "It a spoken menu" she said.  That means nothing to read and mull over.  The $20 banquet seemed to be the order of the day (and apparently every other day too!) and for an additional fiver the banquet would include a variety of Moroccan tapas - this was definitely worth it as it meant we would get to sample more dishes.  I haven't had much Moroccan to date and this was a great place to venture into it's culinary delight.
Within minutes of placing our order, a large plate of dips and curried vegetables accompanied with a big stack of pita bread was "plonked" on the table. 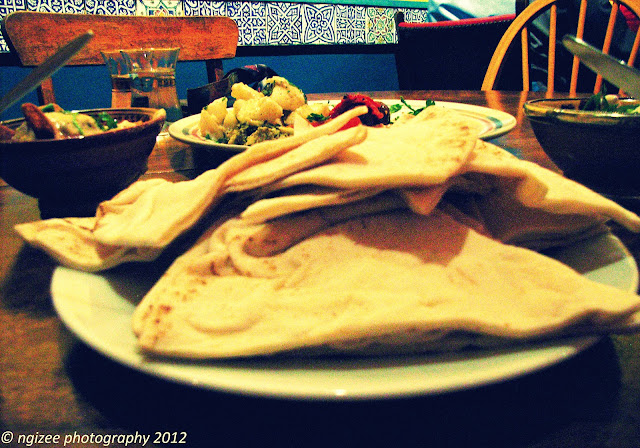 The share plate contained a sample serve of humus, labne, an interesting brocolli dip and equally delicious dishes made from potatoes, cauliflower and eggplant.  The dips were extremely fresh and hit the spot on taste.  The pita bread could have benefited from being heated, but their polygamous marriage with the concoctions on that plate, more than made up for it.

The tapas style dishes joined the party on the table and these were little bowls of pure delicious.  A humus style paste that was drizzled generously over crisp pita triangles, had me licking my fingers.  And a fresh tapas sized salsa made from tiny cubes of haloumi cheese, diced tomato, onion and parsley all dressed in tangy lemon juice.  The bowl below was our favourite - best described as a spicy harissa paste with toasted almonds and olive oil - we love us some chilli! 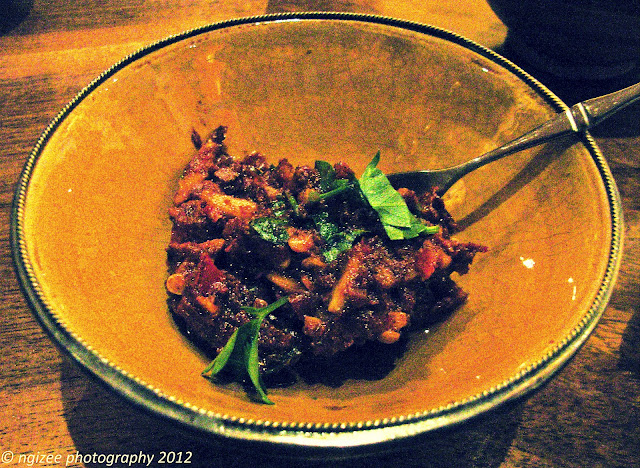 The next bowl consisted of what seemed like really crispy felafal balls with a dollop of yoghurt.  They were extra crunchy which was a contrast to the softer variety at Turkish and Lebanese eateries.  They almost had a meaty feel about them (shhhhh!) 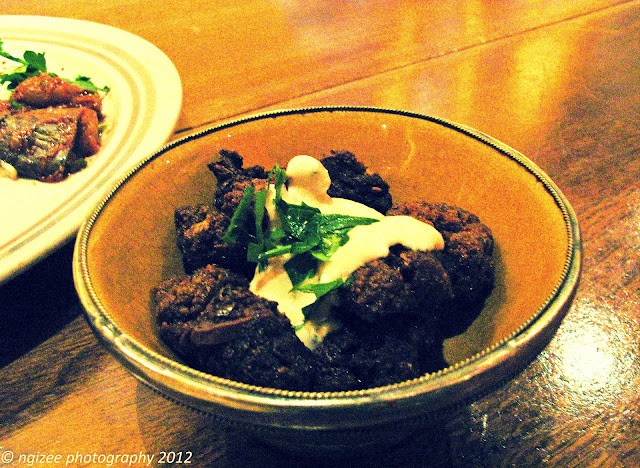 Just as we felt like we were close to our belly's limit, along comes the mains.  Obviously, the first couple of courses were somewhat supposed to be starters, but they were so huge that they may have well as been mains.  Nevertheless, here was the dish that everyone raves about "the chickpea and yoghurt dish at Moroccan Soup Bar" - seriously, you can Google search that string and get this dish - it's that popular. 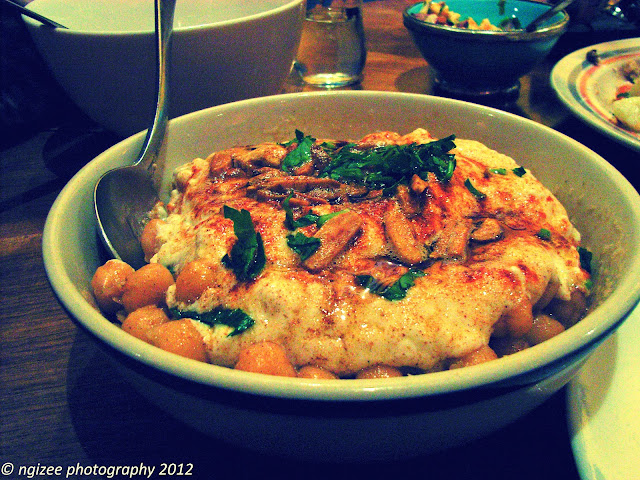 I have a habit of taking restaurant dishes (the really good ones!) and trying to replicate them in my own kitchen.  My strike rate is not so bad, so far, and this is to be the next challenge.  Crisp pita bread shards - almost tasted like they were deep fried - layered with lightly spiced chickpea amidst a tahini spiked yoghurt and topped of with a garnish of toasted almonds, paprika and a secret spice - I am yet to determine - stirred through burnt butter - Wow! That's all I can say! Let's look at another close-up pic of it! 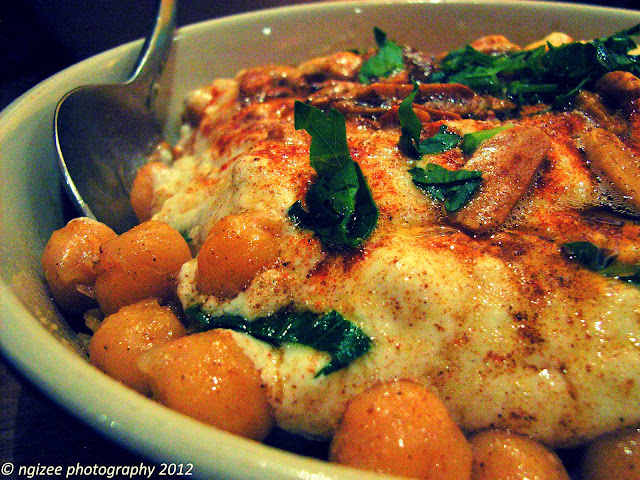 The chickpea was soft and melted in your mouth.  The yoghurt had a welcoming mellow taste and was not as tart as I had expected.  The pita gave the contrasting crunch that just belonged in this melange.  The burnt butter topping is what I think set's this dish apart from anything I had tasted before.  The flavour resonates through the entire dish, you get a hit of it with every mouthful - In it's entirety, this dish just works.  There's nothing missing and nothing overpowering and excessive but the richness of all that butter and yoghurt - but it's oh so good! 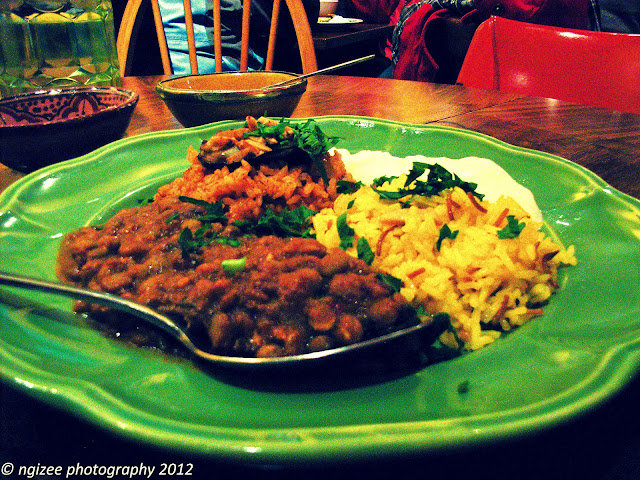 But wait, there's more.  As if the chickpea delight wasn't enough, along comes another platter consisting of a couple of rice dishes, a lentil stew and more of the very wholesome labne.  And because good things come in threes, don't disregard the third main dish - Mixed vegetable tagine on a bed of cous cous - now that was my typical Moroccan stereotype dish right there.  This had been a monster of a meal and definitely more than enough for two people.  Our tables were cleared as the next and final course was about to be served. 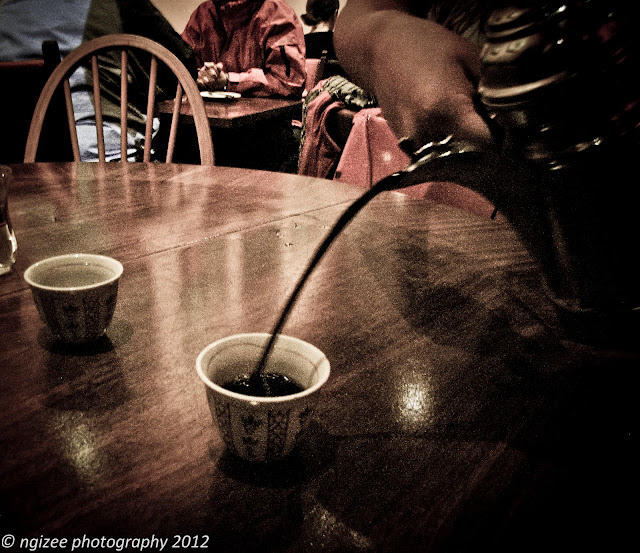 You end the meal with a selection of sweets and a short black coffee which was sweet enough to be dessert on its own.  By the time you've gotten through your baklava you will find yourself immersed in memories of that "chickpea and yoghurt dish from Moroccan Soup bar".  My taste buds were undoubtedly satisfied - and this can be a rarity. 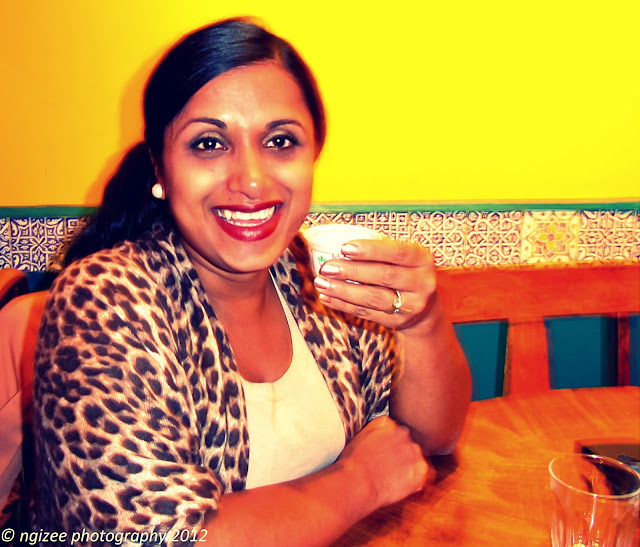 I have nothing but praise for Moroccan Soup Bar.  The venue is bright and gaudy, but I loved the clashing of colour as you dine between an orange wall to your right and a yellow one to the left (or reverse depending where you sit?). 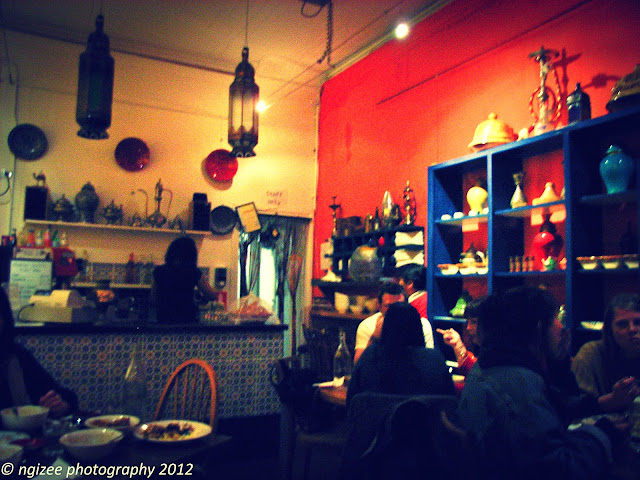 There was now written menu and nothing matched, at least not that I saw in the way of cutlery or crockery, this had its own quirky charm about it.  As did, the decor` - lamps hanging from the ceiling, the shisha pipes sitting atop the blue shelves and the variety of colourful cookery ornaments.  The waitresses were well spoken and polite despite being constantly run off their feet.  When it came to the food, it was a remarkable experience that I highly recommend. 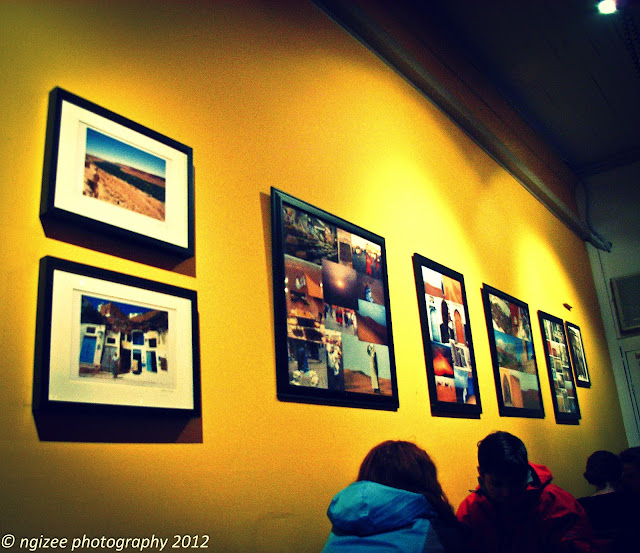 To those that have reported bad experiences - I guess I didn't have one so I can't compare.  Don't expect to walk right in on a Friday night at 7:30 - expect a wait - possibly a long one.  The queues are testament alone to the success of Moroccan Soup Bar.  Get in early if possible. 6:00 PM on a cold winter night isn't too early for dinner - the alternative is waiting in the cold.  At $20 - $25 a head it's well worth it for the amount of food served in the banquet.  Quality and taste is certainly to be found here - just be prepared to use your hands mainly and be sure you are dining with folks who will not mind you "double dipping"

This concentrated heat might be used as any kind of heat source for a conventional power orchid.
Kits can be found much less expensive than a as a professional installed system.

This restaurant is my favourite hang outs. If youve not tried the newly opened branch of Moroccan SOup Bar which serve breakfast and lunch from 9-5pm everyday except Monday, on Lygon St, the old Miramar Nut SHop Brunswick, you should try it.

Wow! These places seemed great. I wish I could visit these places too. Thanks a lot for sharing this list. It is nice to know these places. Best Indian Restaurant in Melbourne 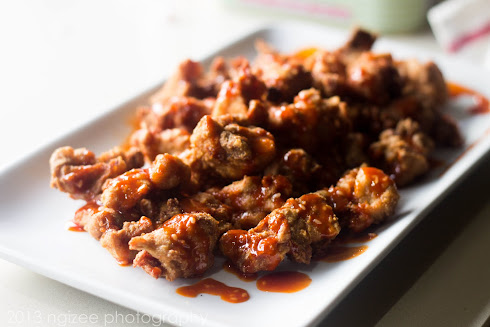